Just added a qb96 to the collection
Stoked to see ur build!!

LOL. I gotta see em rage harder than my HID's before I get too thrilled. My current reflectors are bigger than these panels....so it will be interesting to see how these light the space shooting straight down as they do. My initial plug in/test also wasn't contained inside the tent....so not a fair judge of how it will bounce around in there with two of em running.

My panels are silver rather than red....he didn't have red panels in stock and I didn't really care one way or the other. Gonna be a bit before I get everything up and running. Still gonna germinate/early veg under the t-5's. Just don;t need all that light/watts a wastin' and don;t wanna risk fuckin up my seeds doin something different.

LOL. Not ashamed or too proud to admit when I'm a dumbfuck....

When I plugged that light in...the cord was still all wrapped up in packing tape/foam/etc.....

Good. Was worried they weren’t legitimate qbs and the deal was too good to be true.

Nah....just a rookie move. Felt pretty dumb but incredibly relieved at the same time. The wife was wayyyy cool about spending the funds...I just always like it when my purchases get rave reviews...

Got em hung and they LOOK awesome. Such a huge difference from the boxey Magnum XXL's they replace.

Gonna move the fun to a grow journal but YES....these are LEGIT Samsung boards/Meanwell drivers.

LOL....I have digis with dimmer features but have never used em.....so guess I just didn't think about such a thing. Pretty sure these will run 100% all the time anyway....like the digis. Fuck dimmin shit down...say what?? They ain't THAT bright...

Figure out that CMH yet?

I've been running a 550 V2 for 14 months now and picked up a 550 RSpec on the Black Friday deal. I paid 800 something so that eBay deal is insane! Regarding the lights performance, I'm definitely seeing a difference in how they develop in early flower.

And @Jesselikes2Grow found one like it for ...I think...around 4 hundo. Thanks for chiming in

stiickygreen said:
I think I did even better than that. I was honestly talking to our resident Master Builder about building me a couple of lights when I stumbled across this listing.... Looks like somebody is just buying kits and puttin em together....but for me and my old dogness..i didn't wanna fuck with a build....and when Jesse said he thought it was a killer deal...I just hit the "Buy it Now" for 2 of 'em.... 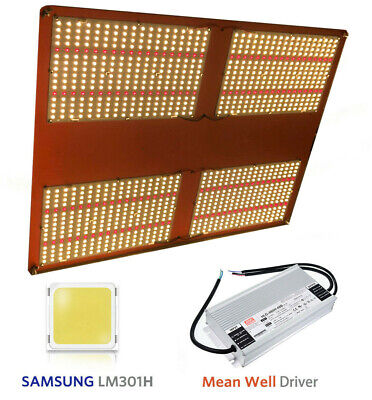 The LM301H diode is the highest μmol/J of any Quantum LED to date. We have Samsung LM301B LEDs as well as the latest LM301H! We use only the latest top bin and highest quality quantum LED's for all of our models!
www.ebay.com

Hey Stiicky, I'm not quoting you to call you out or anything, but to give context for this. And I know this is a few months old, just wanted to post for everyone's edification on the Samsung lm301b vs lm301h.

B or H? No big deal here.......not in my scope of worry/interest/etc. They are what they are and they do what they do.

Rightfully so...it looks like his old lady sent him to the basement with this kinda tech talk...LOL Nice toaster.
S

the leds really are brighter than I expected based on my previous experience. Hell of a setup you got there. Can't wait to see some girls under it

Shit is gettin crazy frosty under these lights, for sure.....even with the cold and the hiccups.

It's never been a cheap hobby. The manufacturers of these products get us because they know many (not me anymore, unfortunately) turn around and make serious cash with their products...so like all other hydro/grow gear...it's priced far higher than it is actually worth for that reason alone.

I have a stack of analog ballasts about 5 ft high......that is what made the switch hard here. All of it still grows great weed and made me a shit ton of money along the way....and I tire of everything becoming obsolete/junk/ending up in the landfill cus trends swing and the corps want more of our $$$.

stiickygreen said:
It's never been a cheap hobby. The manufacturers of these products get us because they know many (not me anymore, unfortunately) turn around and make serious cash with their products...so like all other hydro/grow gear...it's priced far higher than it is actually worth for that reason alone.

I have a stack of analog ballasts about 5 ft high......that is what made the switch hard here. All of it still grows great weed and made me a shit ton of money along the way....and I tire of everything becoming obsolete/junk/ending up in the landfill cus trends swing and the corps want more of our $$$.
Click to expand...

You watch, in 5 years from now people will be wanting bud grown under hids. It will make a comeback like vinyl did. Snooty connoisseurs will be talking shit about Terps being better or some shit like that. What it will boil down to is the fact that it cost more to grow under mh/hps and idiots like to spend money to feel elitist. It will be justified by stupid logic.

LOL. Thing is.....like this 10 year old, sloiw as fuck box I'm typing on now cus my computer shit the bed....it STILL WORKS and it STILL PERFORMS THE TASK. The fads always come and go......and WeedLand is no exception.

Yeah, LED light with grow crystals that play classical music occasionally interrupted with a sweet voice that says... I love you, you're beautiful, you're strong and healthy. Lol
B

Man I’m having a nightmare atm with my new strip light I recently throwed together, this is the first time I’ve started or vegged rather under HID(cmh) and relocated them under LEDs. I’ve kicked temps up in the 80s trying to get them to transpire and they still look waterlogged, leaves are holding so much water they’re completely dropping, stems are purpling bad, necrotic, yellowing. They’re in coco at that and the coco has about dried up once in the week they’ve been under the LEDs, about middle of the week I doubled the cal mag and watered lightly. I’m going to have to give up on these and throw them back under HIDs. All the extra uv, ir and all from the cmh that’s missing now much play a bigger role than expected. It’s like they went from overwatered to underwatered and never raised up. Humidity has been around 40 and I did let it go to 70 just just to see if assbackwards would work. I’ve had plants under a cmh in the basement at 60 maybe even 50 degrees and high humidity and they transpired just fine and these nearly 90 degrees and 40% and drooped to the floor, and I’ve read where other people have had this problem and people say it’s not the lights, hell its gotta be the lights. If they start out under LED, whole life, they do fine but they don’t transfer over good. IMHO, lol sorry for the rant, I’m getting to old for this shit, I shoulda stayed smart like you and left some HID in the mix.

I'm not a coco fan whatsoever. EVERY time I put that shit in the mix I fight yellowing or some other shit. Kinda suspect some of my "colorful" foliage this grow is because I never learn and bought a bag of coco/did a 50/50 with OF. I'll just go back to hydro if I wanna spend too much time chasing pH and shit...LOL. Never again.
You must log in or register to reply here.
Share:
Reddit Tumblr WhatsApp Email Link
Top